For over 30 years the sole coach at the club has been Dave Hanrahan.

He was initially trained by Bert Bracewell, but turned to Ziemek  Wojciechowski when he started coaching.  He worked with Ziemek for 15 years - 10 years on his right hand and 5 years on his left!

He has been to some  30 World, European and Commonwealth championships and was the Olympic Foil Coach and Team Manager at the Sydney 2000 Olympic Games. 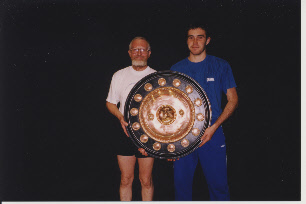